In this picture, busbars manufactured by SOP-Metal are being installed.

In the heart of Southern Ostrobothnia, you can find one of the most successful Finnish industrial companies of the 21st century. We’re talking about compact substation and cable distribution cabinet manufacturer Finnkumu. The company has worked with SOP-Metal ever since it started its production in 2004.

In a nutshell, a compact substation transforms the medium-voltage electricity running in large grids into electricity that can be used by the end consumer. Cable distribution cabinets are then used to direct the electricity to households and other locations. That said, both of these Finnkumu products are necessary when an ordinary consumer wishes to get their electricity conveniently straight from their own wall.

For many years now, the demand for Finnkumu’s products has been on the rise. This is partly explained by the new power regulations in Finland.

With the introduction of the said regulations, rules regarding the uninterrupted availability of electricity became stricter than ever before. This is motivating power companies to bury their power lines underground even in the most remote little villages.

The power lines, however, are not the only thing disappearing from the overhead utility poles: transformers are also brought down and replaced with substations built on ground level.

“The competition in our field is becoming more fierce,” confirms Finnkumu CEO Ms Maire Korpi. “But then again, our main focus has always been on top quality and security of supply, so we’re not exactly worried about these changes.”

Finnkumu produces approximately 500 cable distribution cabinets and 800 compact substations annually. In their production facility, which spans over an area of 2,500 square meters, as many as fifteen substations can be produced simultaneously. Depending on the season, the company employs between 20 and 35 people.

Thanks to successful production planning, Finnkumu has managed to meet the ever-increasing demand without having to expand its organization more than it has wanted to.

Meanwhile, another key factor behind the success has been the company’s extensive storage. All of the components used in over 20 individual products can be found in storage at all times. This makes Finnkumu’s customer service extremely flexible, which is greatly valued in this particular line of business.

“It’s of course not cheap to keep up such a storage,” admits Korpi. “But in the event that a substation or a cable distribution cabinet is damaged, we have the ability to react fast and supply our customer with a replacement product or the spare parts needed.”

“Our cooperation has worked so well over the years that we could hardly have wished for anything better.” 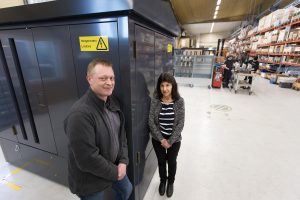 Finnkumu Product Manager Mika Mikkola and CEO Maire Korpi point out that most people see their company’s products every day. “It’s just that few of them actually stop to think about what they are and what exactly is their purpose,” says Mikkola.

Plenty of Good Reasons for Cooperation

Our conversation is joined by Finnkumu Product Manager Mr Mika Mikkola. He remembers how, in its early days, the company used to baffle its subcontractors.

“Many of them found it hard to believe that we would even have a chance to succeed,” he says, smiling. “They were wondering where on earth we could fit all the components we were ordering from them.”

However, these doubts soon evaporated as Finnkumu paid its bills again and again. We’re not sure if SOP-Metal was one of these early doubters, but what we do know is that the two companies have worked closely together ever since 2004, when Finnkumu started its production.

“SOP-Metal has exceptionally large amounts of copper and other raw materials in storage, plus they have the ability to machine all of it,” points out Mikkola. “In fact, I can find plenty of good reasons for us to use them as our supplier instead of someone else.”

The products supplied by SOP-Metal for Finnkumu include ready-to-install busbars, isolated busbars, as well as different kinds of electric isolators, all of which are used both in compact substations and cable distribution cabinets. Before delivery, the busbars undergo various production stages, including cutting, boring and bending. The busbars protected against physical contact, on the other hand, are not only manufactured but also assembled by SOP-Metal for its customer.

In addition to the wide availability of materials it has in storage, Finnkumu appreciates SOP-Metal’s reliability. Mikkola cannot recall a single instance during all these years where anything has been wrong with SOP-Metal’s delivery.

“They’ve always delivered busbars and other components exactly the way I’ve drawn them. If the components won’t fit, I’m the one to blame.”

To get a sense of what an achievement this is, it is worth pointing out that components supplied by SOP-Metal can be found in all Finnkumu products. Moreover, SOP-Metal’s busbars and other components end up in Finnkumu’s products through other suppliers as well.

“On the mechanics side, SOP-Metal is definitely among our most important suppliers,” admits Mikkola. “Our cooperation has worked so well over the years that we could hardly have wished for anything better.”